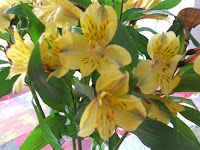 I splurged yesterday at the grocery store and purchased a large bunch of yellow alstroemeria, a lily-type flower. The weatherman is forecasting gray days for the rest of the week. Something about a trapped low pressure system waiting for some stronger weather to move it out. While we wait, it sits and spins over Michigan creating clouds and off and on showers. To offset that tired, crankiness the weather can cause, I wanted to be proactive and purchased the flowers. For me the yellow helps replace the sun. 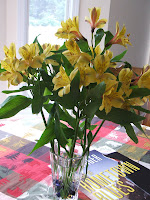 I never was one who wanted a beau to deliver a big bouquet as a sign of eternal devotion. Now that I’m older and married, I appreciate them more. And they do make me smile as the rain pelts the window. When the grayness pulls me to the couch for a nap, I look at the flowers and it helps me go back to writing. I’ve been struggling to create some vivid characters for a short story that needs to be done by the end of the month. Making charcters come alive in short stories is very difficult unless you can show traits by actions. Flowers can help with that.

Does your main character adore or scoff at flowers? Mitch Malone, the crime beat reporter sleuth in my mystery series, would scoff at flowers. He has no idea why the world needs them, thinks they are silly and the folly of woman. However, he would bring them to a date, if he ever had one and thought it would help the girl like him better. What I need to decide is how the female character would react when Mitch shows up with a large bouquet? Does she throw them in his face? Take them and gush giving him a big hug? Take them and then slam the door in his face?

Characters are funny things. You create them, then they have the nerve to have a mind of their own and tell you what they are going to do. Have you ever read a book and the character did something you didn’t expect and you couldn’t say why? Was that good characterizing or bad? My guess is bad unless there is a compelling reason for the character to change that you could find about later.