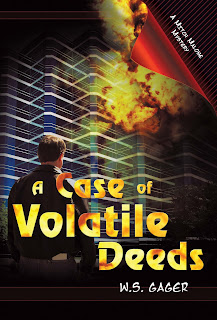 I was running all over the world wide web spreading the news about the release of A CASE OF VOLATILE DEEDS, my fourth Mitch Malone Mystery, and never put it on my own blog. The old adage is true: You can’t see what is right in front of you! Below is the blurb and some early reviews. A special thanks to Les Edgerton and Marja McGraw for the great reviews.

Pick it up at Amazon

Buy it at Barnes & Noble

A Case of Volatile Deeds Blurb: Mitch Malone finally scores a weekend dinner with a cute receptionist, but true to his reporter instincts, an explosion in a high rise office building makes him stand up his date as he runs for an exclusive. Mitch learns that much of what he knows about his date and her work aren’t what they seem. His world continues to twist when the police captain asks for his help and a city hall informant is found floating in the river. Mitch must keep his head down or a cute dog with a knack for finding dead bodies will be sniffing out his corpse.

Reviews:
“Mitch finds himself in a battle to the finish not knowing which are the good guys and which are the bad guys (and gals). Just when he figures out one mysterious thread from the tapestry unraveling before him, two more pop up, and the plot twists and turns in surprise after surprise. A don’t—put-it-down-until-the-last-page thriller destined to be on more than one “Best of 2013” lists.”
Les Edgerton, author of Just Like That, The Bitch, The Rapist and writing books like Hooked: Write Fiction That Grabs Readers at Page One & Never Lets Them Go.

“A Case of Volatile Deeds by W.S. Gager takes twists and turns at every corner, always keeping you wondering. Mitch Malone is a reporter with a heart and a man of integrity, most of the time. This adventure takes him from cops to FBI agents and on to City Hall. Can Mitch find all the answers to a convoluted and deadly scenario? Trust me, you’ll want to follow this path with him.”
--Marja McGraw, Author of The Bogey Man Mysteries