Dennis Collins is a Michigan author who knows what it is like growing up in the auto industry. Dennis and I tipped a few beverages after writer’s workshop and he was interesting. He has two books out about a gritty detective duo called THE UNREAL McCOY and TURN LEFT AT SEPTEMBER. Let’s get right to the questions. Dennis you write about two of the boys in blue. How did you come up with Albert McCoy and Otis Springfield?

A number of my o 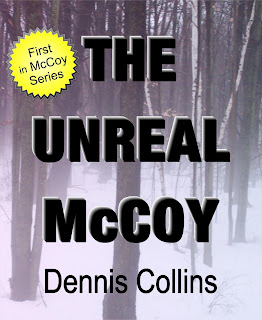 ld school buddies went into police careers and I've worked with a number of police officers in conjunction with civic events in Detroit. I'd say that my cops are pretty much a composite of all the officers I've known. I've tried to feature their most positive professional traits as well as a little personal insight.

You write about Detroit which hasn’t gotten a lot of good publicity lately. Do you think the city can make a comeback?

The Detroit that I grew up in was the most powerful manufacturing center in the United States. Our war effort earned us the nickname, "The Arsenal of Democracy." It would be a terrible loss if Detroit was to simply fade into oblivion. The new mayor is a local icon and sports hero with a reputation for getting things done. He was a major part of Detroit's industrial community as a businessman and I believe that he has a realistic vision of what is needed to reclaim the city's former dignity and respect. There is hope but it will take generations.

You worked as an engineer for one of the Big Three in Detroit for a number of years. How did that help you write about the detectives?

My job took me to the manufacturing floor where I needed to interact with the hourly workforce on a daily basis. Auto workers are a large and truly diverse group. I worked with some who were unable to read at even a third grade level and some who were college graduates. One was even a Mensa member. This wide cross section presented a wonderful opportunity for people watching and cultural observations. Some of the characters that I worked with were gamblers and bookies and then there were drug addicts, alcoholics, and ex-cons. But they all showed up and worked as a team most of the time. Many were immigrants and many were from other parts of the country. I don't know of another place where I could have observed a wider spectrum of human behavior. Quite a few of these people translated into characters in my books.

Turn Left at September is a unique title. How did you come up with that?

I actually didn't have a title for that book until long after the first draft was finished. As is my practice I spread several copies around to trusted friends for proofreading and critiques. One of the women who read it sent me a note saying, "your title is on page ---- (can't remember), 'When you get to September, turn left'." It was simply a line out of the book. at first I didn't like it but when I began running it by people for their input I was amazed at how many folks thought it was great. I'm a guy who listens to critics.

Not many people know I did a stint in Bad Axe as a reporter and had to hot foot it out of there when I got on the bad side of some people. You live north of there on Lake Huron. Does being by the water help your creativity?

I have to say that the serenity of the Lake is helpful in getting me in a creative mood and on sunny summer days I often write on the beach (with a pad and pencil, laptops and sand don't mix). But the simple truth is that Lake Huron can be an intimidating and unfriendly environment when the Gales of November rear their heads. In the winter, just pull your shades and write.

Kindle has changed the face of publishing and opened up a whole new world with new readers and a much broader market. I have been so encouraged by the reaction to my first two books since releasing them on Kindle, I have decided to introduce my third book The First Domino in electronic format for all e-readers. It should be available very early in June at an extremely attractive price.

Thanks Dennis for the honest answers. To get more scoop on the is books, check out his website at http://www.theunrealmccoy.com