Today is a bit of a stretch for crime beat reporter and no-nonsense guy like me. I’m interviewing Kip Itxaron, a character in a newly-released book by A.J. Walker called ROOTS RUN DEEP. If you think I have issues, it is nothing compared to Kip, but let me let her tell you about it through the masterful questions by yours truly. Kip, first tell me about the world you live in? 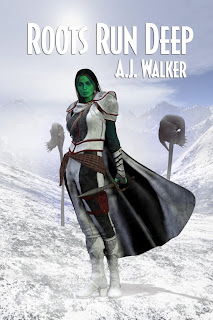 Whose world—the world of the goblinkin or the world of the humans? I’m a goblin (men are hobgoblins, and the race is goblinkin, try to remember that, human) and my world is the Reservation. That’s where the humans make us live. Rocky soil that’s no good for farming, a stinking shanty town, and stuck on the edge is the Great Forest. Don’t go in there or the elves will use you for target practice.

The human world is a world of big cities, palaces, opportunity, and privilege. Humans own everything and make all the laws. I’m familiar with Vancian, the closest human city to the Reservation. I work there sometimes. In the day I scrub floors or clean privies. It’s a crap job with low pay, but that’s all the goblinkin can get. Helps me know the city, though. Knowing the city is essential for my night job. But perhaps I shouldn’t tell you about that.

Not that I believe in that goblin stuff, but W.S. Gager must be out to convert me about things that seem impossible. I understand you see visions? What’s that like? Anything I can place a bet on?

I broke free of the Reservation and journeyed into the distant mountains in search of the Lost Tribe of the Goblinkin. While I was there I visited a cave where the wise ancestors of the Lost Tribe sat in a circle, mummified. I sat with them through the night and had a vision of blood and fire, of betrayal and hope. I learned of my fate, and I learned of the dynasty I would bear. They said I’d change the world, and damned right you can bet on that.

You have quite a history of a self-made woman. Tell us about being raised in a shanty town and then being called to lead your people.

It all started on my job. My night job. The human king Roderick got deposed and I had to smuggle him across the river. My boss got a good sum for that, and I got a lifetime of headaches and responsibility. I didn’t know he was the king, of course, he was disguised, but I soon found out. He made me a deal—raise and lead an army of goblinkin to help him retake his throne, and the goblinkin would get equal rights. Since the guy who overthrew Roderick was out to exterminate my people, I didn’t have much of a choice. My people never have a choice.

Why did he pick me? Because of my fighting ability? My leadership ability? Not likely. He picked me because I was the only goblinkin he knew.

I don’t have any phobias but I understand you have a fear of battle? Why? Do you really have to conquer this? Is war looming?

On a job in the early days, a deal went sour and we had to cut our way out. I killed two that night. One was just a human rogue, but the other was a goblin. The look in her eyes. . .

W.S. made me ask this question because she knew I wouldn’t. It’s about love. I hate talking about this mushy stuff but I understand there is a bit of a love interest in this? How does that work for you?

Roderick. How in the world did I fall for him? He’s a human, and a king without a throne. The king without a throne I can deal with, although it means I inherit a whole lot of enemies. It’s the human part that I don’t get. Let’s be honest, Mitch. Look at yourself in the mirror. You don’t have any tusks, you’re strong for a human but wouldn’t win an arm wrestling contest with a hobgoblin twelve-year-old, and you don’t have even a trace of green shading to your skin. Pink? Brown? Those are colors for shirts, not skin.

So yeah, he’s ugly and a bit of a loser, yet he’s got this inner strength to him. His men don’t follow him for profit or out of fear like with goblinkin leaders, they follow him because they love and respect him. He always tries to do right, even though he screws that up more often than not, and he’s the only guy of any race who admits it when he’s wrong. Can you imagine an elf doing that? “Oh, I was wrong for sticking an arrow in that goblin.” Maybe he’d say, “Oh, I was wrong only to stick one arrow in that goblin.”

Thanks for joining us today Kip. It has been amazing learning about your time and will be looking for the book. Where do I find it?

Thanks for having me. You’ll be over at my place later for me to interview you. We’ll share a bottle of fermented goat’s milk and I’ll cook up some rat on a stick. You can buy my ebook directly from Double Dragon:
http://www.double-dragon-ebooks.com/single.php?ISBN=1-55404-804-4
from the Kindle Store or at many other online outlets that sell ebooks.
Posted by WS Gager at 8:36 PM