Mitch Malone here and I'm going to try and clean up my act a bit. I don't have a lot of soft spots but I do for today's featured author, Marilyn Meredith, also known as F.M. Meredith. Marilyn gave a great cover quote for my first adventure, "A Case of Infatuation". Marilyn just released another Rocky Bluff PD Mystery. Marilyn, you accomplish so much with at least two books every year and you are kinda up there in years. To what do you attribute your stamina too?

Marilyn: This question made me laugh. Yep, I am in my late seventies (eek, that sounds old) but inside I feel the same as I always have. I’ve always liked to accomplish things, you even say that’s what drives me. I’m an early riser and that’s a good thing because that’s when my brain functions the best. By late afternoon I’m busy cooking dinner and once everyone’s eaten, I’m done with anything that takes a brain power.

You have some great characters in your books. Tell me how you came up with idea for Rocky Bluff PD?

Marilyn: My police officer son-in-law (who was killed in the line of duty 20 years ago) is the one who got me interested in writing about people in law enforcement and their families. The town of Rocky Bluff is partially based on the beach community we lived in for over 20 years though I moved it farther up the coast between Ventura and Santa Barbara. I wanted it to be a small town with a police department that doesn’t have much money and mostly relies on old-fashioned police work to solve crimes. And of course a lot of the focus in the books is on the personal lives of the police officers and what goes on in their family life.

I interview a lot of police officers and fraternizing between officers is often frowned upon. How do you handle the relationship between Stacey Wilbur and Doug when they work together? 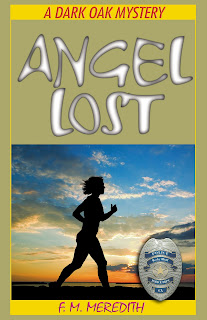 Marilyn: In earlier books, Stacey vowed never to date a police officer. When she began working with Detective Doug Milligan her resolve melted away. In "Angel Lost" the coming wedding between Stacey and Doug is primary to the story. Because it is a small department, and Stacey being the only female officer for awhile, the issue of fraternization between officers has never come up. And as I like to remind people, Rocky Bluff P.D. is my department and I can do it anyway I want. (Smile.)

Gordon Butler is a character that I can relate to. Sometimes I have strings of incredibly bad luck. Is there any relief for me, err him?

Marilyn: Gordon Butler is one of my favorite people. Poor guy, he can’t seem to do much of anything right and adds a bit of comic relief to the more serious stuff that’s going on in Rocky Bluff. He’s a by-the-book officer which sometimes adds to his problems. He ends up being a bit of a hero in "Angel Lost." In 2012, the next book in the series will feature Gordon.

Do you have actual angels? Do the angels help the police solve crime?

The title, "Angel Lost", has two meanings which I can’t really tell you because it would give away too much. But there is only one angel who appears in a store window at night and though it’s important, whether or not it’s real is not for me to decide. After you read about the angel, let me know what you think. And no, the angel doesn’t help solve any crimes—but it is important.

Why do you say the book is written by F.M. Meredith instead of Marilyn since everyone knows you by that name?

Marilyn: When I wrote the first book in the series I thought that if I used my initials people wouldn’t know I was female. The majority of the first books were written from male point-of-view. When the first book came out the publisher put my picture on the back cover, so I might as well have just used my regular name.

Thank you, Mitch for taking the time to interview me, this has been fun.

I think my author had the same thought when doing her book, but I don’t want to say anything. Glad you could take the time from your busy blog schedule to be interviewed by yours truly. If you want to see more information about "Angel Lost" or the other books penned by Marilyn, check out her website at: http://fictionforyou.com
Posted by WS Gager at 12:10 AM