Mitch, here. I’ve got a lot in common with Trixie Frye and I can’t wait to get to the questions. She is filling in for her author, Bobbye Terry. Kind of the same way I fill in for W.S. on Mondays. Trixie Frye has her hands full with her sister, Roxie. Let’s get started on the questions and see what’s up in her kitchen, err book.

Trixie, your story, “Buried in Briny Bay” was just released. What is up with that sister of yours? You can’t just kill people if you are unlucky in love. 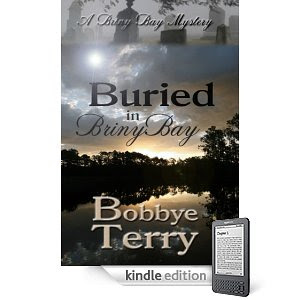 Trixie: Mitch, you have no idea how full my hands really are. Roxie is like fast drying quicksand. She grabs you and holds you captive until you get sucked in. But, truth be told, my sister didn’t kill anyone and I’m going to take on anyone that says she did. It’s just a mite peculiar the victim was the same woman who took Rox’s first boyfriend away from her and married him. Of course Georgia was also the same woman who got pregnant by Roxie’s husband who was later found mowed down by a tractor-trailer while coming home for leave from the Army. All coincidence, honestly. I’m as sure of it as I am the bay will flood this spring. Bodies may be stacking up, but I tell you my baby sister is innocent and I’m going to prove it. As long as no one else dies.

You can’t spend your whole time bailing out your sister. What keeps you out of trouble?

Trixie: I own this diner called Happy Daze Diner and I get people the house special, icebox lemon pie and some sweet tea. Hubby Floyd Frye, my very own couch potato when he’s not working as a barber at his shop, keeps an eye out for me, not that it really means all that much, seeing as he has his glued to the TV screen for any sports event from Monday Night Football to panning for gold . Of course even at work he can watch TV, which does make me ponder how good his haircuts really are. Never mind, enough about Floyd. He’s an albatross only I should bear.

Icebox Lemon Pie? Huh? I’m a doughnut connoisseur myself but I’d be willing to try the pie. What makes it so special?

Trixie: Now I can’t give away the secret of my house special. Let’s just say it makes you sassy, satisfied and sweeter than sugar.

Not sure sweeter is better for me. It seems that you and Roxie may be an interesting pair to watch. Something bad happens. I’ve read some of the descriptions and other than you keep finding dead bodies it seems pretty humorous. Do you mind people laughing at your antics?

Trixie: (Rolls eyes) People gotta do what people gotta do, but anybody raised in the South, especially female, knows the only way to stay sane is to joke a little. I mean, honestly, why cry when you can poke fun at yourself? But believe me, we’re as serious as a man on the opening day of hunting season about out sleuthin’.

Wow, that is pretty serious at least when it’s deer hunting season in Michigan. “Buried in Briny Bay” is published in an electronic format and is billed as a novella? That mean you only have half a story? How does a novella work?


Trixie: Now darlin’, everybody knows that it’s not the quantity of the goods but the way they make you feel. This book wallops a heaping tablespoon of goodness in every chapter. Plus it’s just the right size for a good night’s read.

I might enjoy a novella. I’m pretty busy on the crime beat and don’t have time for big books. If I wanted to get your books, where would I go?

Trixie: Bobbye and her publisher, Turquoise Morning Press, have made sure they’re available just about everywhere. But to help you out, because I am a southern lady, I have some of the links below:

Thanks for stopping by Trixie. I can’t wait to stop at the Happy Daze Diner. You made my mouth water with that lemon pie but I’ll take mine with a beer instead of sweet tea. That’s a northern thing! Don’t forget to check out the book and some other adventures of Trixie and Roxie at http://BobbyeTerry.Blogspot.com.